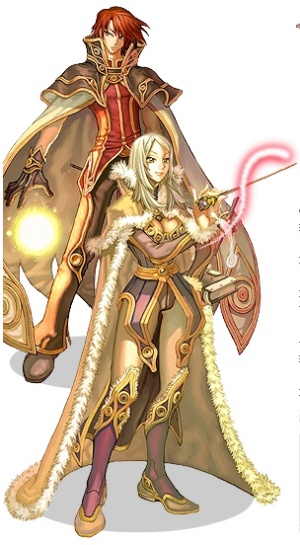 Wizards strive further to hone the power of the elements, as a result they have obtained knowledge on how to use this power on a wider scale. Wizards have access to AOE spells that can be used to dispatch their enemies in groups, as well as learning stronger single target magic. Elemental counter is still an important aspect of a wizard, using the wrong spell could break the party flow when dealing with tough opponents. Wizards could also function as crowd controllers by either keeping them at bay (via Slow, Stun or Freeze) or killing them outright.

Wizards are still limited to using either a dagger or a rod/staff, the latter being the most used. 2-handed staves offer better offense power, as they have higher matk, at the expense of not wearing a shield to reduce incoming damage. 1-handed staves/rods are still used in cases of needing to wear a shield. Casting is more of a problem to a wizard now with the AOE spells having lengthy casting times, so having uninterruptible casting is a crucial attribute for wizards in PVM (doesnt work in WOE settings so you can just skip). INT and DEX are the primary stats for wizards so as to reduce both casting time while having higher matk. LUK is optional for its influence on matk as well.

Requirement: Mage who has reached at least Job level 40 (50 is still recommended due to the numerous skills of mages)

From the City of Geffen, head to the center and enter the Geffen Tower, proceed to the top floor and talk to the NPC behind the counter. After confirming your decision to change to a wizard, you will proceed to do the first of 3 parts of the exam.

1) The first part is an item collection test, you will be instructed to bring either of these 2 sets (if you are job 50 this part of the test will be skipped and you will proceed with the 2nd part):

2) Next you will be directed to the Dismal Wizard found in the southwest corner, he will ask you to answer 10 questions and you must answer this at least 8 out of 10 right to proceed to the final part of the exam. there are 3 sets of these questions (Answers are in Bold):

3) The last part of the exam is a skills test, The Dismal Wizard will warp you to the testing are wherein you have 6 rooms full of monsters to fight, each room having a specific element. Note that some of them are cast censor or are aggressive, so use your spells wisely, having uninterruptible cast (use a phen carded accessory) for this part of the test will be a bonus. You will be first warped to the normal room of that element where you will kill all of monsters inside within 3 minutes, then be warped to the boss room for that element and kill the boss and spawn monsters for 1 minute. Failure to do so for any of the rooms, you will be respawning at the bottom of the tower, where you will have to go back up and talk to the Dismal Wizard, he will ask you 5 questions again prior to redoing the test.

After passing the test, talk to the Magic Guildsman at the counter and she will promote you to a Wizard, and you will be given 6